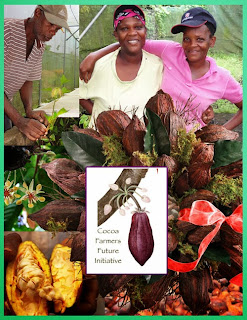 Dear Friends,
2013 has been a banner year for CFFI, and our accomplishments reflect all three aspects of our mission. With your generous support, we have met and surpassed all of our 2013 goals, including

• helping cocoa farmers get their beans to market more efficiently;
• providing hands-on education for farmers so they can maximize the quality of their cocoa beans while preserving the benefits of traditional farming;
• providing farmers with an organic alternative to the petroleum-based fertilizers currently being used; and
• securing new sources of revenue for CFFI while creating a variety of new job opportunities for Grenadians.

Helping Farmers Get Their Beans to Market
This year we were able to buy a farming truck to assist in the collection of wet beans across the island. The impact of this purchase has been immediate and dramatic. When farmers don’t have to walk their beans to market, they can spend more time cultivating cocoa trees and learning new ways to enhance the quality and value of their product.
Continuing Education and Other Support for Farmers
In 2013 we turned three acres of abandoned farmland into a model teaching farm and spice garden. At the model farm, visitors and local farmers can learn new techniques in sustainable farming, grafting, and propagation. We were able to hire two full-time employees—local young men who are learning the art of cocoa farming from older, experienced farmers, whom we have hired as consultants. The model farm is a wonderful example of how we can boost economic development while promoting sustainable agriculture and biological diversity.
Our “Buy A Tree—Support A Farmer” campaign has also been a great success. With donations to this program, we have provided high-quality saplings, along with organic planting compost, to over forty farmers. By contributing to this campaign, our donors are providing direct assistance to farmers while helping to preserve a rare and delicate environment.

Looking Forward to 2014
We are looking forward to an even more successful year in 2014.

We can’t thank you enough!
Posted by CFFI Grenada at 9:26 AM 1 comment: 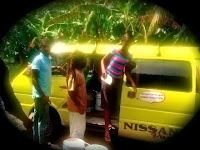 Wednesdays are cocoa collecting days here in Victoria Grenada. Farmers travel for more than 5 or 6 miles to sell their cocoa beans to The Grenada Cocoa Association. And this is where "Fear Not" our trusty van comes in...farmers call us and we meet them to pick up their product. This farmer was lucky enough to find us while he was walking along the road with his daughter. Can you imagine walking 2 miles with all these wet cocoa beans?  Well, that's what they were doing and they sure were happy to see us coming along!


Farmer George was not so lucky- he walked from his farm to the collecting station with 10 lbs on his head and 10 lbs in each hand. Next week we will make a point of getting up to his farm.


The "Buy A Cocoa Tree" Campaign is going really well.  Thank you everyone for the support!  We have sold well over 100 trees. People are starting to purchase them as holiday gifts (we are sending out cards with these purchases).
http://www.cffigrenada.org/CFFI_donate.html

Just a reminder...if you are in the Vermont area CFFI will be featuring their crafts at The Cotton Mill Open Studio & Holiday Sale.  Great art, shopping,performances food & fun!
www.thecottonmill.org /802-257-7731
And on Monday The Ruggles & Hunt Bi-annual Fashion Show will be held at The Burdick's Restuarant- it is always a blast!
www.rugglesandhunt.com

Support us in this great Buy a Tree campaign! 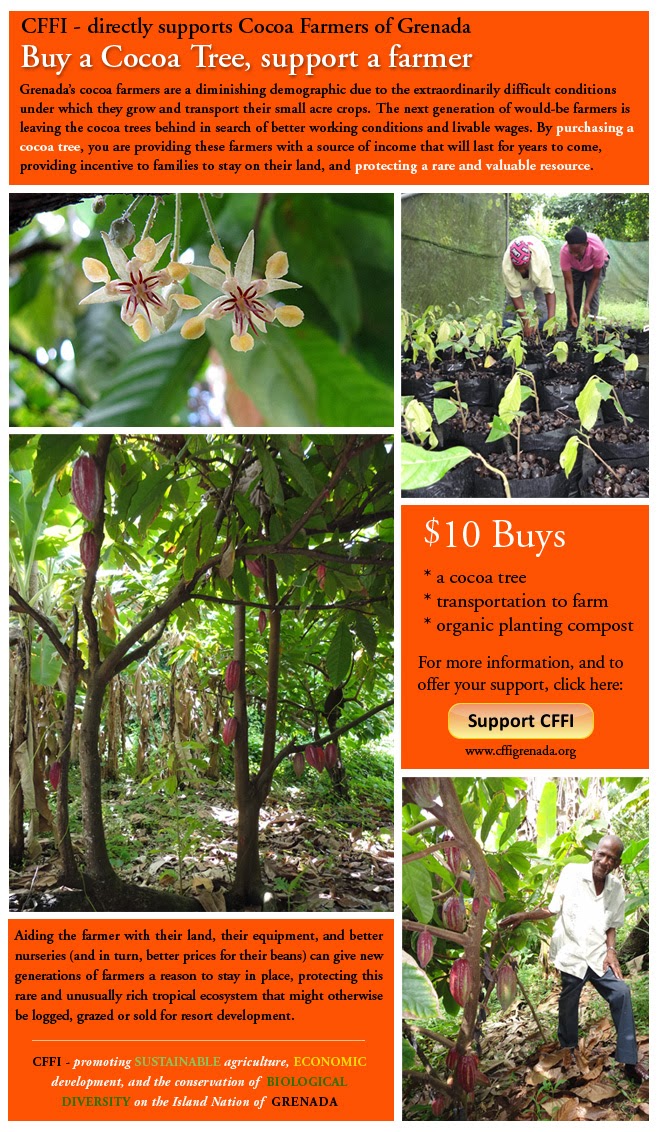 Posted by CFFI Grenada at 11:30 AM No comments:

The First Three Weeks-What a Success

So much has happened here in Grenada these past three weeks! We have hired our first two employees-Kimon Julien and Rawldon Mark. They have both been working efficiently and with enthusiasm.
They have cleared the cocoa farm land and are now building a "living fence" around the property. We are using razor grass for the fence. It will help keep out the goats and the cows. They also maintain our compost bins, turning them, adding scraps from the nursing home and chicken manure from our local chicken farmer. We now wait patiently for the professionals to come help us prune trees, cut others down and plant new ones.


Besides the purchase of "Fear Not" our beautiful
new van we also bought boots, gloves and cocoa plants!
We are definitely in business.
CFFI has a campaign on our website
where people can buy cocoa trees for $10..00. The $10 buys the tree,
transportation to the farm and organic compost to plant with.
Check it out at www.cffigrenada

Last night we had a good bye dinner for Dorise. Everyone in Grenada will miss her energy, good will and hard work. But no one as much as me. She has made my first three weeks so productive and helped me create a home here in Victoria.  I have many local friends thanks to Dorise. I think we all look forward to her return. But she has a husband who misses her back in NH so I am happy that she is going home. Also, she has many craft shows to do. These crafts shows help us bring in money for the farmers and in addition the craft people are getting excellent money for their products. So it is that full circle we are always talking about-people helping people.
The first show Dorise will be doing is:
Christmas Market with a Difference
Now in it's 26th year, 17 organizations will be represented at this year’s Market.
http://www.ccdcucc.org/cmwad/
If you are in the Dartmouth College area of Hanover NH, it is well worth the stop! The dates are: Thursday, November 7   10-6
Friday, November 8      10-6
Saturday, November 9   10-1
Cheers,
Paula
Posted by CFFI Grenada at 8:44 PM 2 comments:

It All Begins with the Soil

CFFI is bound and determined to under cut the price of chemical fertilizer here in Grenada.  We have built our first composting bin out of bamboo and have contacted the local businesses to let them know that we will pick up their fruit & vegetable scraps. We have also developed connections with small,  local chicken breeders and will be buying the manure.
Please  contact CFFI is you have any suggestions or ideas on this project. We are looking for ways to get worms here in Grenada, if anyone has an idea we would love to hear from you.
All comments are greatly appreciated!
Posted by CFFI Grenada at 5:00 AM No comments:

CFFI Is On The Move

Dorise & Paula two of the board members of CFFI have moved to Grenada, bought the van featured above, and are ready to work!
This van will allow us to start picking up farmers who do not have transportation on collecting days. We are getting the message out through Tony Telesford and his morning agricultural radio show "Real Expressions" on www.realfmgrenada.com-every Thursday Morning from 7-9AM. Hope you'll be able to tune in!
Posted by CFFI Grenada at 6:11 AM 1 comment: 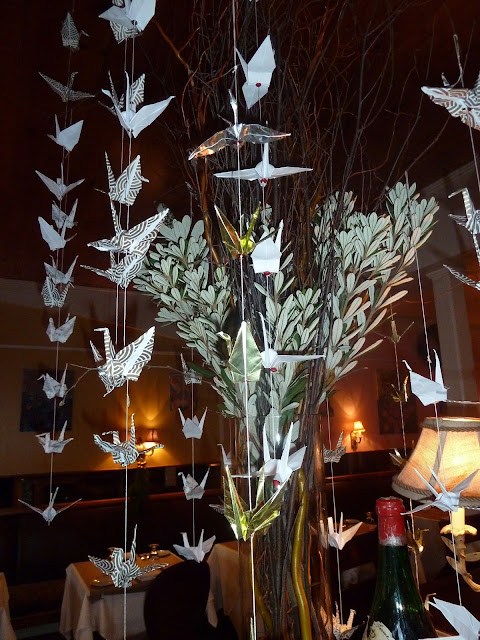 Made by hand in Grenada by the Women's Cooperative

To celebrate life,
for all occasions,
wedding, parties,
or just for fun! 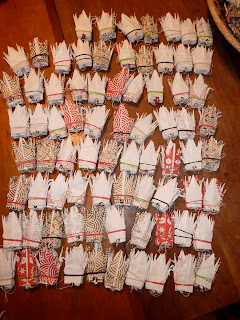 Cranes in bundles of ten....

For inquiries or purchasing
contact Doko
doko@cffigrenada.org
or phone
603-863-6366

Posted by CFFI Grenada at 4:11 PM No comments:

Help has sailed in 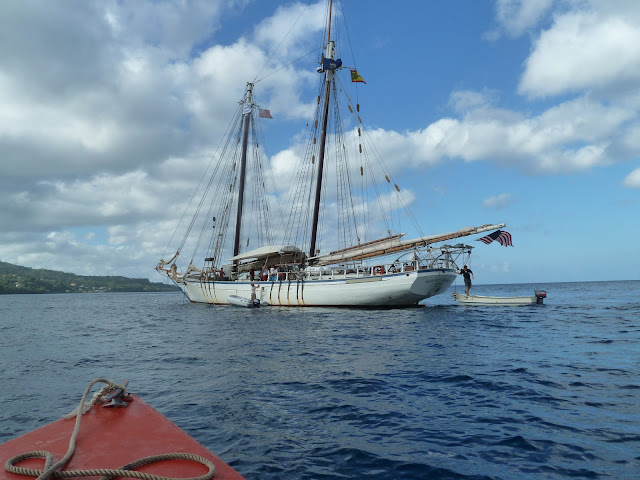 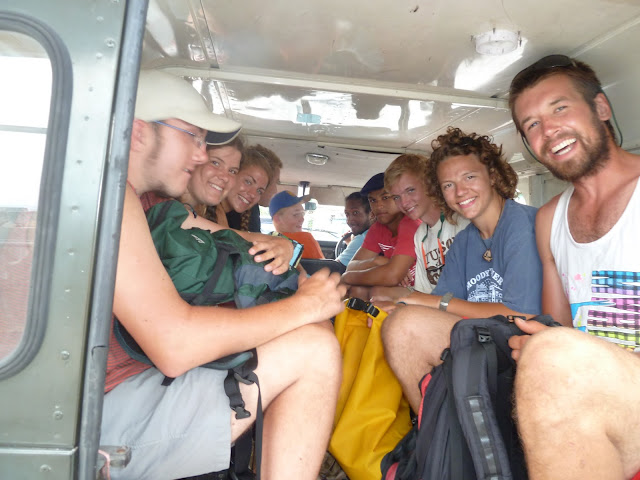 Pick up time early in the a.m., everybody is ready to work. 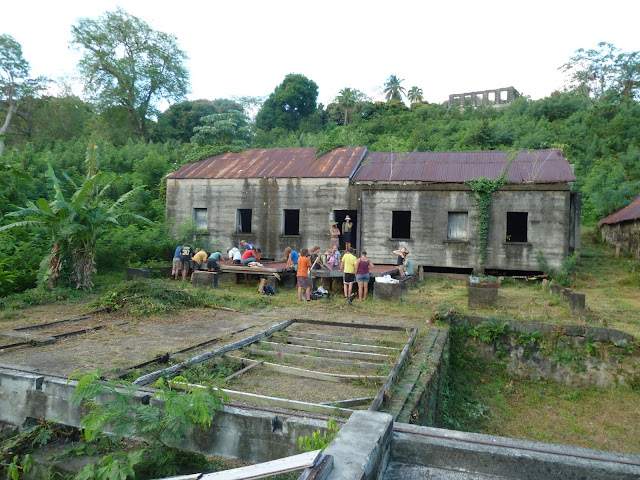 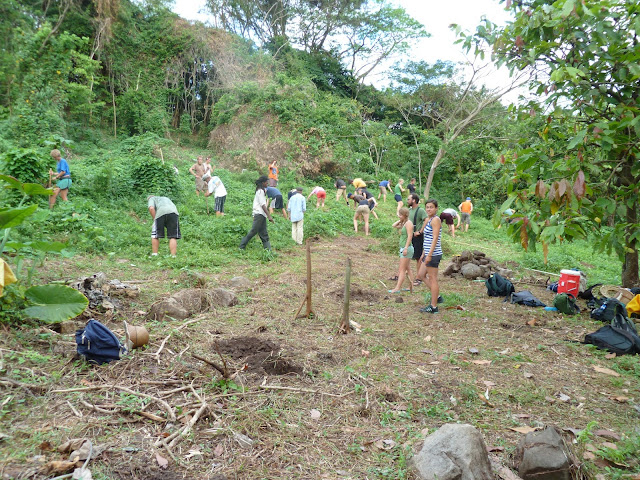 After clearing the bush, the students planted 100 trees ,.... in one morning. 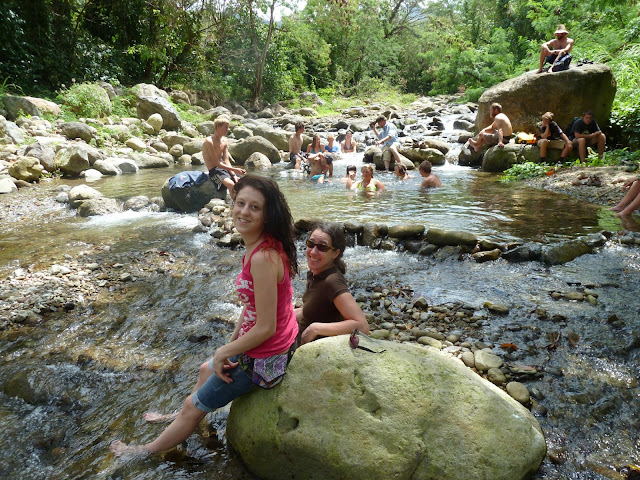 A well deserved soak in the cool water.

Posted by CFFI Grenada at 5:19 PM No comments: 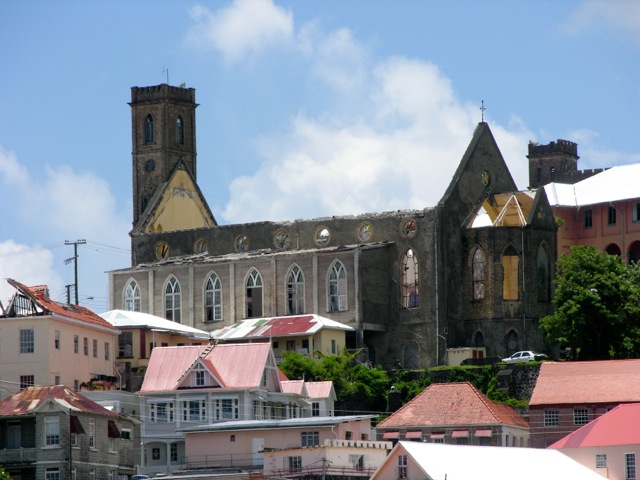 St. George’s  harbor, I immediately saw it was more gorgeous

with it’s roof off then it had been when it was whole.

Last fall, the hurricane had blown the roof away and the ﬂoor to one side was

still in tact.  Nature left the nave wall standing and Christ remained on the

mystery of a dim sanctuary.

After dropping a dollar in the contribution box, I felt compelled to keep going

up the hill where there was a lovely , overgrown graveyard with English

sounding names on the tombstones.  Most of them were embedded ﬂat so I

could jump from one to the other.  I reached the very edge of it where the

land suddenly disappeared under a tree descending steeply, 20 stories below,

Down to the left the bustling harbor was being

rebuilt in front of two huge cruise ships and their

passengers rushing  the streets to ﬁnd something to buy.  On the other side

sports arena crushed away from the harbor, decimated and deserted,  in

begin hopping tombstones back to the entrance, I sensed  movement beside a

lonely, naked dwelling collapsing next to the graveyard.   To the side and

above the road going down  to the beach,  the bent ﬁgure of a tall, long

rooﬁng up the steep grade,  came into my view.

My ﬁrst thought was to run

and help her, but then I went reverently still,  to prevent intruding on

there.  I observed the torturous, tedious task of her getting this strip

positioned in a way she could lean it against the decapitated little house.  After

piling rubble and climbing on top of it, she gathered enough strength to tip

the rippled strip of metal onto the roof and

and already it was noon.  Perhaps by evening, she might have shelter from

sudden, short showers and be able to sleep in privacy by tonight.

with my glimpse of simple survival, I chose to walk the precarious path

late lunch.  When the food had been cleared and everybody was declared

aboard, we suddenly discovered we had speakers attached to

the front mast.   The hearty sound of  Mahalia Jackson

surrounded us with “Amazing Grace.”

Grateful tears relieved my eyes as we fell in place to the rhythm of the hymn,

hoisting the sails, thus beginning our journey from Grenada through the

All the elements were in our favor.  The sails made that

sucking sound of capturing the wind and the ship quickly tipped to one side.

We could still see the rooﬂess churches of St. George’s far behind us when

synchronized ﬂotilla arching out of the water right beside the ship, before

anyone could get their cameras out!

Surely all was right in the universe and I had a

blessed adventure ahead of me.

Marilynn Frances Lundy is a business consultant and coach in NYC.  She has travelled all over the world for business and pleasure, which gives her a global perspective on all that she pursues. She has written the book, "The 10 R's For Better Speaking, That Can Transform Your Life" and if you wish to purchase it, or find out more about her coaching, you can go to her website,IntegratedLifeDesign.com  Marilynn is currently writing a memoir, to be completed by the end of this year. If you want to read a blog of her most recent trip, to study Art Deco Design in Cuba last month, please go to her website, EnvironmentsInteriorDesign.com.


Posted by CFFI Grenada at 6:07 AM No comments: