After three days of all-hands-on-deck cocoa harvesting, we beat our personal goal and doubled our previous record for cocoa sales on our three-acre farm! On Wednesday we sold 1,032 pounds of wet cocoa at the Diamond Cocoa Station.

Throughout the day farmers lined up, hauling buckets and bags of wet cocoa loaded onto trucks, carts, wheelchairs, strollers - often borrowed from generous friends and neighbors. Large estates might fill a truck, while small farmers with a handful of trees fill half a bucket.

An unusually rainy January blessed farmers with an especially abundant crop.  Unfortunately, rainy days also slow the process of drying beans, which relies on the sun.  Since they could not move the beans quick enough, the cocoa station closed its doors to new cocoa beans during mid-January.  Though many farmers were frustrated the facilities lack the capacity to accommodate their success, farmers now had three weeks worth of bountiful crop ready to sell. 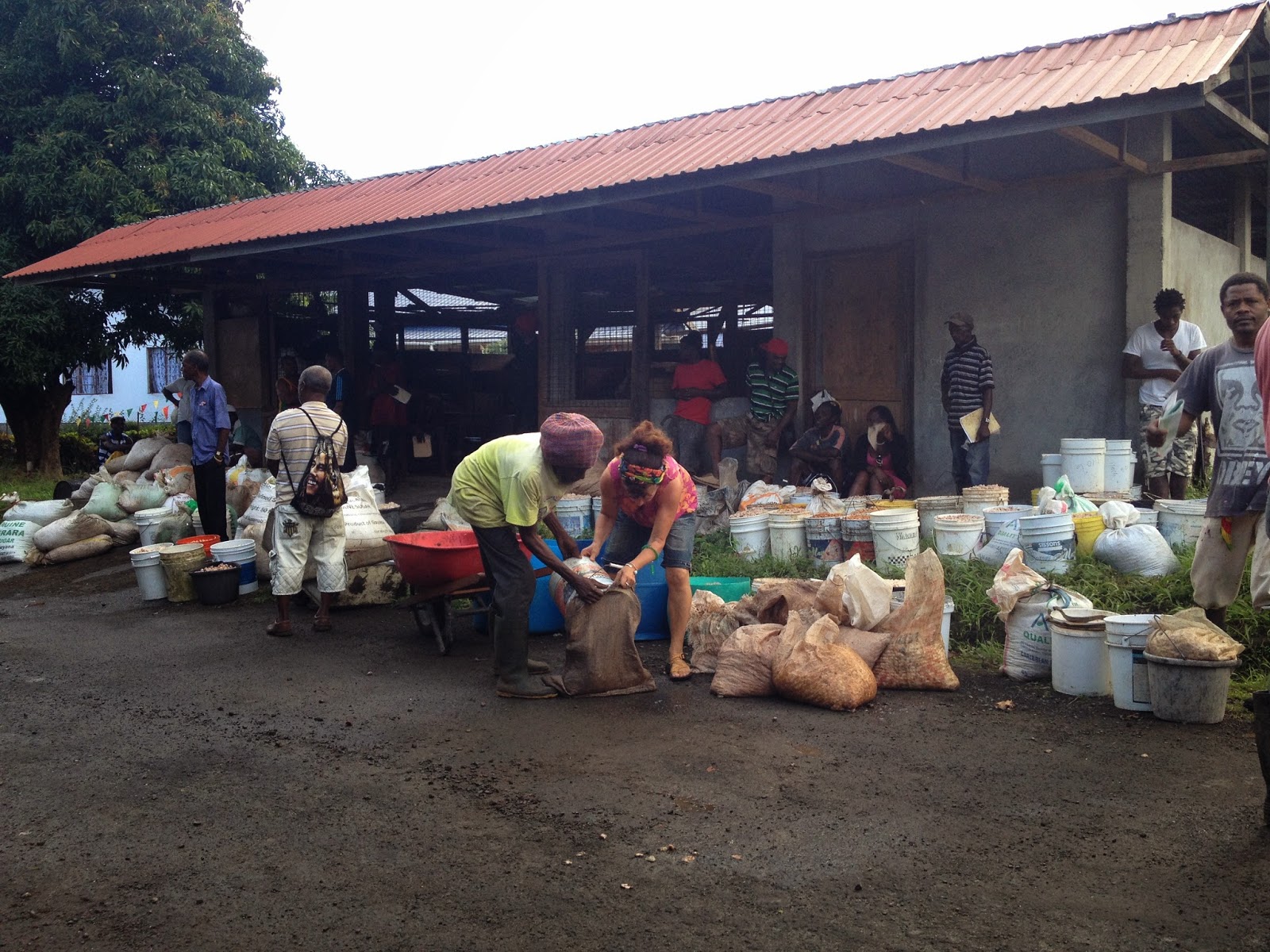 The line for weighing runs on a chaotic honor system, and station employees work long hours lifting tons of cocoa into sweat boxes where beans from all over the island mix together for fermentation.  Starting as early as 6am, farmers continued to line up along the street into the evening. 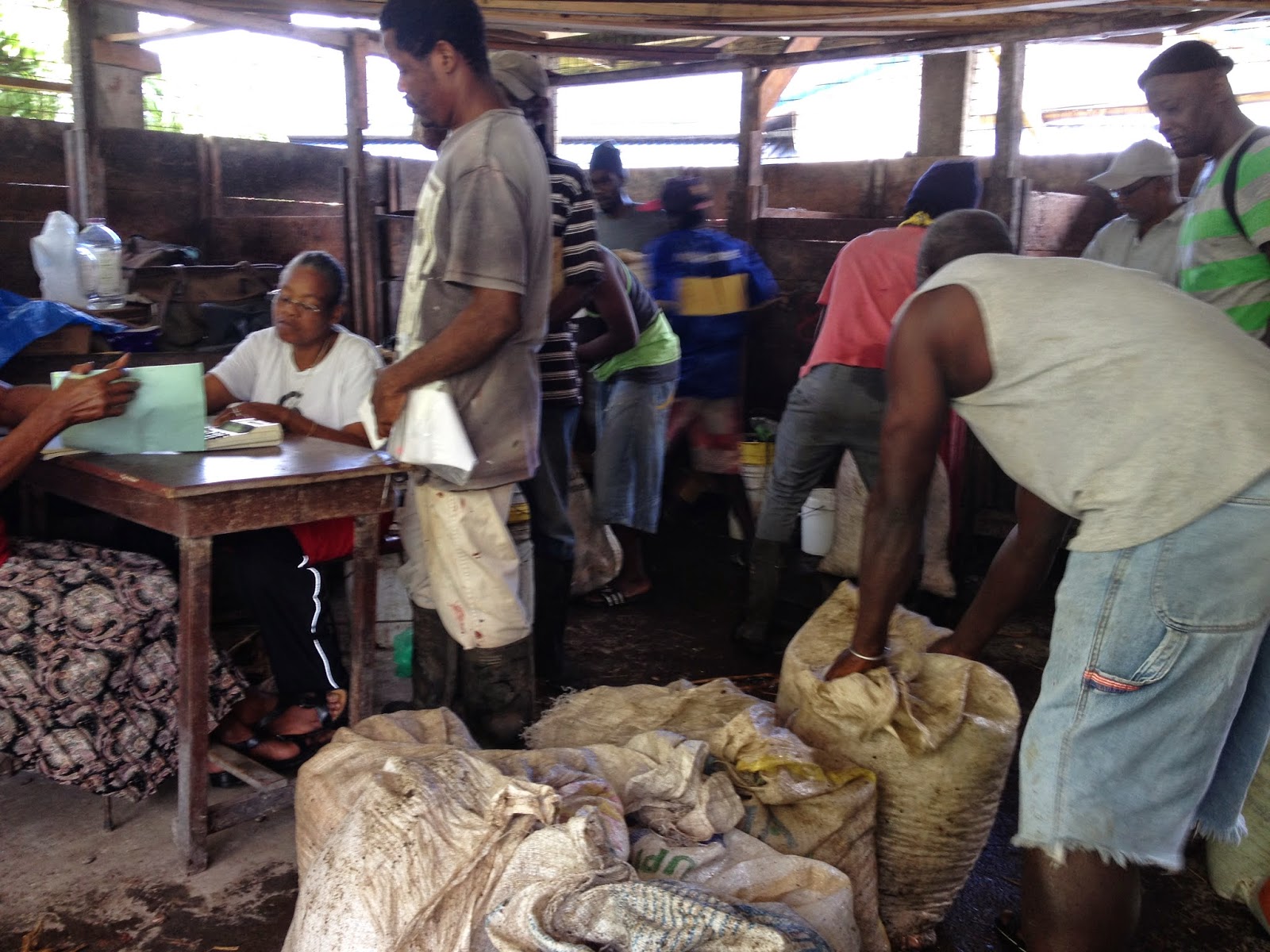 Bags of cocoa are placed on a scale and recorded in books, with checks written to the landowners at $1.50 Eastern Caribbean Dollars per pound. 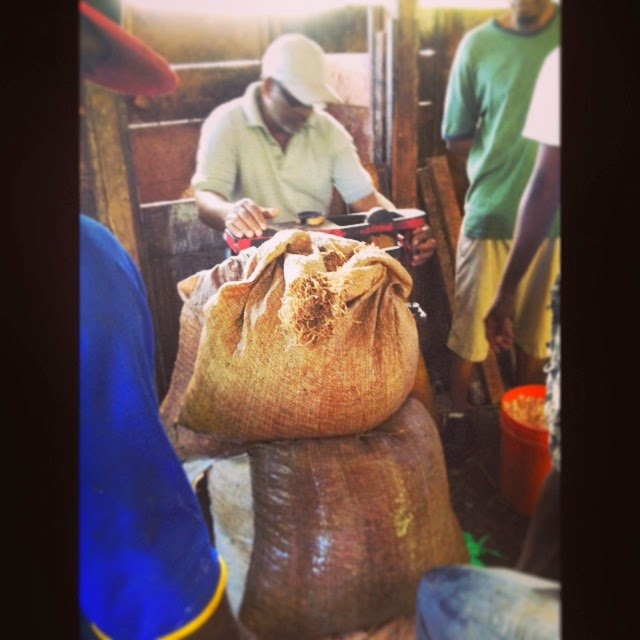 We typically harvest 200-400 pounds during cocoa season, with our record high at 586 pounds. In just over a year of rehabilitating the land we have more than doubled our yield.  Our friend and fellow cocoa farmer George says the progress on our farm is "an inspiration to see" as he walks to his land every morning.

George helped us prune our trees in October. Proper tree maintenance is essential for rehabilitating old trees and rejuvenating cocoa growth.  This allows trees to get the right amount of light and air flow and has to be done by a knowledgable farmer or expert who knows how to achieve the ideal shape without sacrificing bearing branches.

In addition to careful pruning, we're adding our natural compost around trees, digging drains for proper irrigation and working with natural controls for pests and diseases like witches broom and beetles.

In other news, our craft store is nearly complete in the cellar of the Jouvay chocolate factory.  Stay tuned for photos of the beautiful artwork, crafts and woodwork!
Posted by Unknown at 4:07 PM 4 comments: